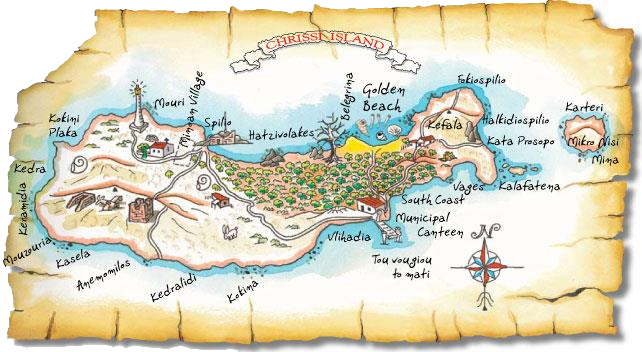 Chrissi island or Gaidouronisi is located 8 miles south of Ierapetra city, in the open South Cretan Sea. It is a flat islet very famous for its tropical blue water that cover all possible palette hues of blue and green, the protected forest with large juniper trees and the thousands of broken shells that make the sand pinkish. The residents of Ierapetra love this island and call it simply "the Island". It is said that years ago by Gianni Agnelli, the chairman of Ferrari, wanted to buy the island to make it a tourist attraction.

Chrissi takes its name (golden in Greek) after the white sand that covers the entire island and comes mainly from shell debris. The tropical beaches are crowded by many visitors who come by the excursion boats that leave Ierapetra in the morning and return in the afternoon. Chrissi has been declared as an area of natural beauty and it is strictly prohibited to camp and spend your night here. You must keep away from the fragile juniper trees and avoid not collecting sand or shells.

Situated 15km off of Ierapetra on the South coast of Crete, the natural beauty spot of Chrissi (Chrysi) island with its protected ecosystem can be found. Though no longer a secret location, Chrissi island rather resembles paradise with its white sand beaches and African Cedarwoods not to mention the crystal clear blue water perfect for snorkeling. Read on to discover if a day trip to Chrissi Island could be one of the many highlights of your trip to Crete.

Covering an area of 4,743 sq km (7km in length and 2km wide), Chrissi Island is a protected nature reserve covered by the European initiative; Natura 2000. An important ecosystem, it is the natural habitat of snakes (non-poisonous), lizards, worms, and rabbits with Caretta-Caretta sea turtles and the Monk Seal Monachus-Monachus also visiting the island.

A rare 200-300-year-old cedar forest covers 70% of the island, making it the largest naturally formed Lebanon cedar forest in Europe with the trees reaching 7-10 meters in height and 1 meter in diameter.

The island was formed from solidified lava and 49 species of fossils (made up of shells, corals, barnacles, and urchins) have been discovered, these being trapped by the lava between 350,000-70,000 years ago when the island was still underwater.

Chrissi Island is the southernmost natural park in Europe (though not the most southerly point of Europe which is at another island just off of Crete; Gavdos) and is sure to make you think for a moment that you’ve landed up in Bali or somewhere in the Caribbean rather than a stone’s throw away from the Greek island of Crete!

Inhabited by pirates (ruins of pirate merchant ships lay on the bottom of the seabed) and hermits in recent history Chrissi island has a 13th-century church and graves from the Roman Empire. However, recent archaeological discoveries show that humans have been visiting Chrissi Island as far back as Minoan times.

Evidence shows that people would have most certainly used Chrissi Island for fishing and salt mining but perhaps, due to the availability of shells, it was also here that the classical antiquity dye known as Royal Purple was made using the extracted mucus of the spiny dye-murex snail.

Named Chrissi (Χρυσή) for its golden beaches, the island also has another name – Gaidouronisi. This translates as ‘the island of the donkeys’ as locals from Ierapetra used to take their beloved old donkeys across to Chrissi so that they (the donkeys) could spend their last days enjoying the pristine beauty of the place.

Today it’s the tourists who enjoy the natural beauty of this idyllic islet!